Hong Kong is all about balance. Nature and steel. Silt and sparkle. Yin and Yang. This masterpiece of divergences is a Feng shui city bereft of boring angles or a predictable head turn. Spicy aromas billow from a flaming street wok. An animated hawker peddles jade from a humble stoop, his wispy beard blowing in a gust from a passing double-decker. In a corner office sixty floors up, a suited banker creates eastern wealth like a modern day alchemist. Each plays a part in defining the complexities of character forged in this balancing act of humanity. Vertically, Hong Kong is man's answer to the California redwoods - thousands of spires erupting out of the earth like a civilization on steroids. If ever mankind had something to prove, they proved it here on the banks of the South China Sea.

After the Opium Wars in the 19th century, Hong Kong became a British colony. This colonial conquest fostered Hong Kong's character in amazing ways. Compromises were made, the city was built, and the unlikely union created a hybrid society where east met west. The Brits and the Chinese built towards the sun and created a hulking civilization. The end result is Hong Kong - a city lavished in sublime food and breathtaking vistas. It is near impossible to yawn with boredom in this extraordinary city, and these ten experiences are a great foundation to any stay in Hong Kong.

Ascend to the Peak
Victoria Peak is the highest point on Hong Kong Island, and the panoramic view out over the steel and glass jungle is awe-inspiring. To reach the peak, follow the signs from Hong Kong central and board the peak tram which shuttles you up to the peak at an unbelievably steep angle. The Peak boasts a multilevel shopping mall, great restaurants, and some of the most expensive real estate on the planet. For food options, a disappointing Bubba Gump looms in a display of stale consumerism. Luckily, there is also a Mak's Noodle, which serves up piping hot bowls of scrumptious wonton soup endorsed by Mr. Bourdain himself.

The Peak is a huge tourist draw. It is as mainstream as it gets and for good reason. The view is undeniably epic. Looking out across the harbor is to understand the scale of humanity.

Explore Tai O
The dichotomy of Hong Kong is a characteristic that is perhaps its most endearing. People assume it is only towering skyscrapers and glowing neon signs, but in actuality, Hong Kong is 40% parkland. For the yin of every bustling Kowloon intersection, Hong Kong has a peaceful yang nestled away on one of its many islands.

Tai O is a rural Chinese fishing village on the western side of Lantau Island. Lantau Island can be reached by boat or subway in a little over thirty minutes from Hong Kong Central, and Tai O can be reached by bus or taxi from the Tung Chung MTR stop on the island. Speeding from the hustle of Central to this old school fishing village frames the breadth of Hong Kong's character. Tai O is a great place for eating fresh seafood, exploring, and even searching for elusive pink dolphins that appear occasionally just off shore. The stilt houses and country charms are a welcome respite from the urbanity of Hong Kong's jungle of towers.

Wander Hong Kong Park
In the shadows of the steel and glass monstrosities that blanket Hong Kong Island is a very serene park. Hong Kong Park was built in 1991 at a cost of almost 400 million U.S. dollars. It was worth every penny. Boasting a surprisingly good (and free) aviary, a foot massage path, an Olympic square, several sporting areas, an artificial lake with a waterfall, and many other cool features, the park is a relaxing way to spend an afternoon. Located near the Central MTR station as well as the Peak tram station, it is very accessible and easy to find.


Dim Sum and Yum Cha
While similar in portion size and functionality to Spanish tapas, comparing dim sum to any other culinary tradition is an affront to its ancient legacy and the centuries of culture inherent in each bite. Dim sum literally means "to touch the heart." Originating in Cantonese China, the meal was originally intended as a social snack with friends or family. As the years passed, dim sum evolved into a full blown meal to be consumed in the morning or early afternoon. Some dim sum staples include shrimp dumplings, phoenix talons, congee, and the ubiquitous barbecue pork buns.

Yum cha is a tradition with roots reaching back into the Silk Road days. Traders would stop by tea-houses for a snack and some hot tea. Translating to "drink tea," yum cha is a term that is largely interchangeable with dim sum. Today, yum cha is the experience of drinking tea and gorging on a dim sum meal. A fantastic place to have tasty dim sum is the Michelin starred Tim Ho Wan. This restaurant may be the best place in the world to eat dim sum and is surprisingly cheap.

Shop the street markets - Ladies Market and Temple St. night market
Hong Kong is a perfect city for shoppers. One can purchase a real Vacheron Constantin watch in the Peninsula arcade for $18,000, or buy the knockoff version in one of the street markets for under a hundred dollars. Fake iPhones with lackluster functionality clutter high tables in display cases of high techno-comedy. Their smartphone brothers and sisters belittled by the mere association. If you crave Christian Louboutin shoes, then those are here too. You can buy the red soled pumps for roughly $50 if you bargain right. Of course, they are "same same but different," which is to say they are fake. For the real thing, walk a few blocks south from the Ladies Market to Harbor City. A Louboutin boutique opened just last year - the second in Hong Kong. Expect to pay twenty times more for authenticity.

The Ladies Market is full of fake items, from Bapes to Rolexes. Selling both male and female clothing and jewelery, the market spreads out over several Mongkok blocks and is open every night. The negotiators are real professionals, so bring your "A" game and be prepared to walk away a few times to get your price. Exit the Mongkok MTR to access the Ladies Market on Tung Choi St.

The Temple Street night market is slightly less cramped than the Ladies Market and is located near the Jordan and Ya Ma Tei MTR stops. It has similar offerings to the Ladies Market, except with a wider range of strange offerings. There are also a multitude of great places to eat, and the local color is phenomenal. Hong Kong men lounge around shirtless drinking and playing cards at tables along the street.

Ride the Star Ferry
One of the greatest commutes is the world is a simple boat ride across Hong Kong harbor. The Star Ferry transports over twenty-six million passengers per year and costs about a quarter (2 HKD) for the cheapest route between Central on Hong Kong Island and Tsim Sha Tsui on the Kowloon peninsula. It has been in operation since the 19th century, and provides sublime views of both sides of the harbor. Traveling at night from Kowloon is especially colorful.

Fortune telling at Sik Sik Yuen Wong Tai Sin
Otherwise known as Wong Tai Sin Temple, the temple is dedicated to the Great Immortal Wong - an ancient Taoist who could turn stones into sheep. The temple architecture is traditional Chinese with lots of red, golden roofs, and various dragons. It is a very popular place to pray and is especially busy during the Chinese new year. It is located in Kowloon by the Wang Tai Sin MTR station.

Kau Cim is a spiritual fortune telling exercise and is extremely popular at Wong Tai Sin Temple. The process involves shaking a bamboo cylinder filled with fortune sticks until one falls out. The stick that falls out is exchanged for a corresponding fortune provided by an oracle. The temple is open from 7:00am to 5:30pm daily, and overnight on the Chinese New Year.

Ride the Ngong Ping 360 to Big Buddha
On Lantau Island, small cable cars slowly ascend to the foggy heights of Ngong Ping village and the Big Buddha. The village is largely a tourist concoction, though the nearby Po Lin Monastery has lurked in these hills for over 100 years. The Tian Tan Buddha is a massive structure - the second largest seated bronze Buddha in the world. Supposedly, it can even be seen from Macau on a clear day. Ironically, in the photo above, the Buddha can hardly be seen from just twenty feet away.

Dive in to Hong Kong's natural side
Hong Kong is almost half parkland, so there is much to do for outdoor lovers. There are hiking trails, nature parks, fishing, beaches, and even scuba diving. For hiking, Lantau hiking trail is a very popular 70km trek around luscious Lantau Island. Similar treks exist between villages on nearby Lamma Island as well. On Hong Kong island, the Dragon's back is considered one of the top Urban treks in the world, snaking through the green backside of the densely populated island. The ramble ends near Shek O beach.

In northwestern Kowloon, the Hong Kong Wetlands park is home to several wild flora and fauna, from rare Black-faced Spoonbills to a famous croc known as Piu Piu. The Wetlands is a peaceful retreat from the city and is normally quiet on weekday afternoons. 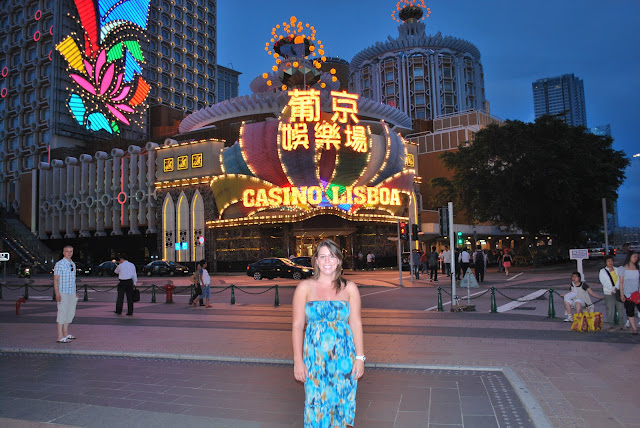 Visit Macau
Macau is a gambling mecca for the eastern hemisphere. In China, it is common for people to toast to luck rather than health, and the Macanese casino revenue numbers spotlight this infatuation. With gaming revenue roughly four times that of Las Vegas, Macau has skyrocketed beyond its desert brethren in popularity.

The boat ride from Hong Kong is a 40 mile jaunt on high speed boats and hydrofoils from the Hong Kong Macau ferry terminal in Sheung Wan on Hong Kong island. The boats are always running, so it is possible just to show up and board, though booking in advance is wise, especially on weekends and holidays. The trip takes about an hour each way.

The Macau territory is considered a special administrative district of China and was once a Portuguese colony. As a result, the culture is a very intriguing mash-up, especially when it comes to food. Macanese cuisine is a tasty and especially unique array of western and eastern influences. This is where tapas and dim sum intersect. Try a pork chop bun or a pastel de nata.

All photography by Justin Delaney
Posted by justindelaney at 10:05 AM