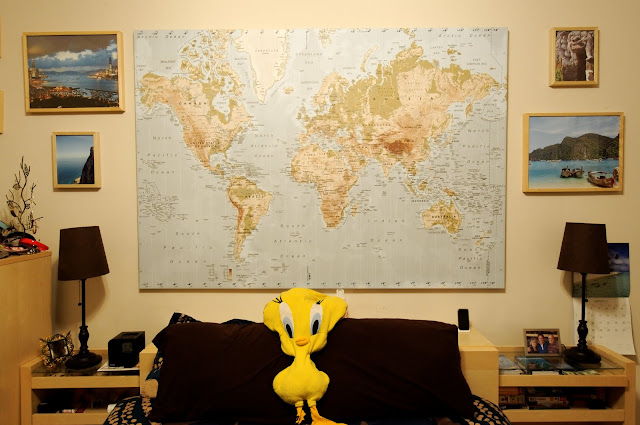 Born Tweetsworth Herringbone Yellowhead in the Fall of 1993, he was, at first impression, simply a stuffed yellow "Tweety" bird given as a Christmas gift to a young girl.  Since receiving this bird into her arms, Kristin has taken it to bed with her on 99.9% of nights.  An unbreakable bond has been established between girl and bird, and as a result, anywhere she go, he goes.

So much more lay under his emotionless face and pillowed veneer of simplicity.  His background remains a mystery.  There have been whispers that he came from a small town Fair, sold by a crooked magician to cover dental expenses.  Some speculate that he is not from this planet at all.  I heard from an elder Rajasthani Shaman that he lost his arms in a cockfighting match gone horribly wrong on the busy streets of Kolkata.  Regardless of where he came from and why, he quickly made a lasting impression on a blossoming Kristin Dushman.  Boasting an immensely proportioned head, 1 frail leg (the other was gnawed off by a dog), and a complete lack of any features resembling arms, he had a quirkiness about him that belied his true intentions of becoming the biggest hanger-on travel freeloader that I have ever met. 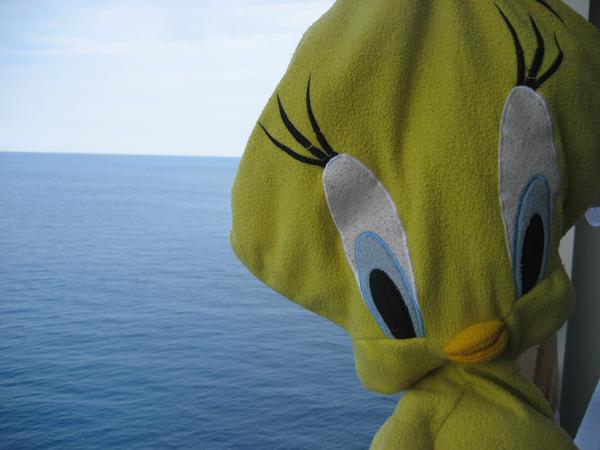 At Sea
Fast forward, and there I stood, at customs in a one room shack called an international airport.  Limon Province, Costa Rica.  We had just landed on a beach runway, and even the local fire department arrived to greet our harrowing descent.  Dangerous vibes.  These are always best experienced after the fact.  I waited in a long line to have my bags inspected.  Kristin and I had just met a few days prior in Panama, and I was about to be treated to my first bird sighting.  Kristin was holding up the line with multiple bags.  In these days, she traveled like mid-nineteenth century aristocracy, with large bags no fewer than three, taking with her blankets, pillows, curling irons, and all manner of unnecessary creature comfort.  As the customs official pulled a large frumpy yellow bird out of her suitcase, a look of befuddled confusion creased across his sweaty Latin American brow.  The act resembled a magician hesitantly pulling a dead rabbit out of his hat.  He knew not what to make of this creature.

And neither did I.  I was familiar with baggage, but this was my first experience meeting a girl that had a large yellow bird.  And he was large, with a head size doubling that of a human being.  The officials joked about it in Spanish, folding him back into his powder blue luggage home.  I was awestruck. 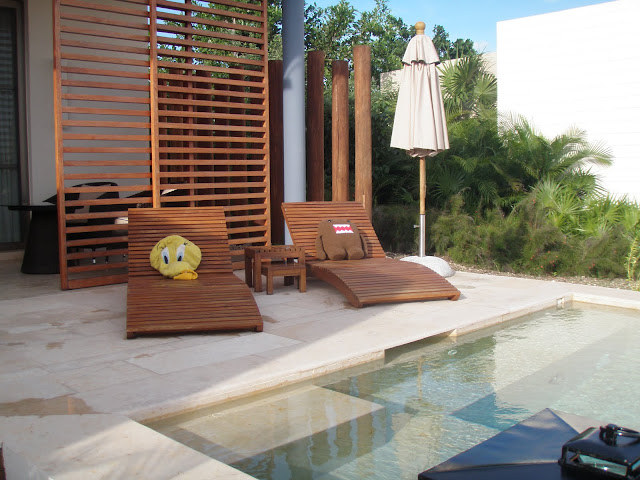 Getting sun with Friends in Mexico
Within the next few weeks, Kristin and I begin falling for eachother, and as a result my fate became inexplicably linked with this yellow fellow.  As we planned out first trip together, I remember asking her, "Really, we are bringing that huge thing with us?"  So far, he has not missed a single trip.
Posted by justindelaney at 9:28 PM

Email ThisBlogThis!Share to TwitterShare to FacebookShare to Pinterest
Labels: home