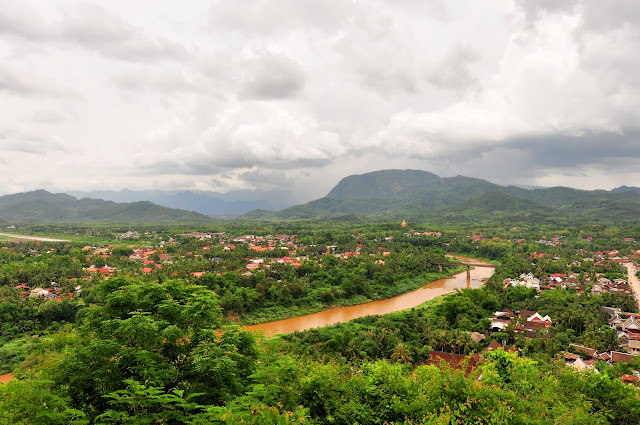 We approached the Mekong river in Northern Laos on old derelict bicycles. My bike had only one working gear, and keeping it in second became my raison d'être on these morning rides. The mist hung low, just above the ground, as though we were navigating through clouds in some high remote corner of the world. We were famished. The night spent high in the hills smacking at winged nuisances and cursing their stings proved tiring, and we sought sustenance. A woman standing behind a cooking apparatus, perhaps fashioned out of old motorcycle parts, came into view. She appeared to be tending a stew of some kind along the river. As we approached her to inquire about meals, a look of excitement spread across her face. Her emotion changed quickly though, and sheer panic suddenly widened her brow. It was though someone told her she won the Lao Lottery, only to realize that she had lost her winning ticket. She murmured something that sounded like an apology, and took off at a brisk pace towards the village. We all looked at each other and shrugged our shoulders. Where to now? 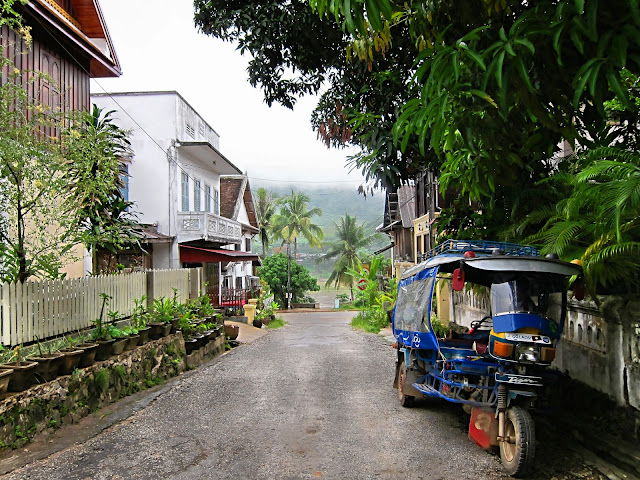 As we mounted our bikes and fastened our helmets, the woman came racing back, arm and arm with a young boy. He was winded, and when he finally caught his breath, he told us one thing, while sheepishly staring at the ground, "We have noodle soup."
And like that, he was gone. He turned around and raced back towards whatever it is Lao children do on a weekday morning. Our hostess waited for a moment, scanning our faces for acceptance. We looked at each other, nodding up and down while smiling. She showed us to our table. 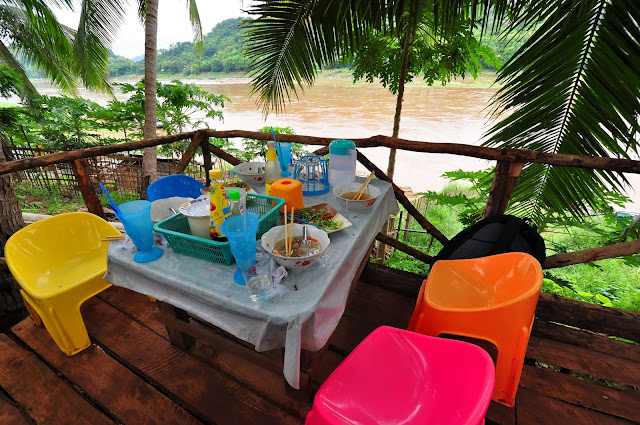 We each sat in one of four brightly colored stools, childlike in size, around a table overlooking the halcyon Mekong River. Across the river, monks draped in orange robes marched up and down steep steps to the river's edge. Every trip down was taken with great care, slowly, as each balanced a large bag on his shoulder. They would grunt as they threw the bags into a long and narrow boat and returned to the top to repeat the process. Some joked around with each other while others raced back and forth, as though they had somewhere important to be later in the day. Their grunts and laughs fell into a distant rhythmic beat. 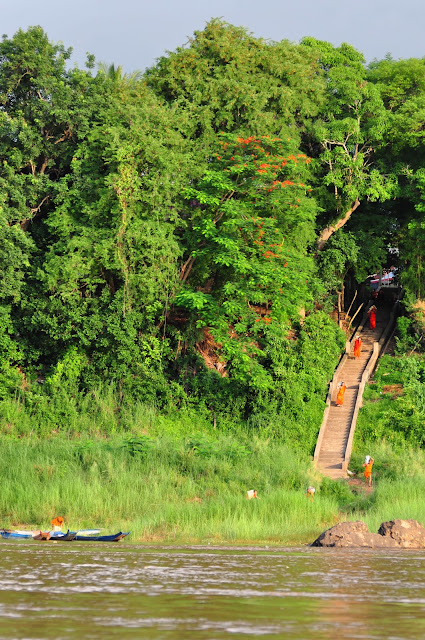 Our table had a weathered blue plastic caddy on it, filled with "Chillie" sauce, two bottles of which were undecipherable. One depicted a menacing looking squid, tentacles wrapped around a chili. Judging by the intensity of the Squid, the sauce likely put out high numbers on the Scoville Scale, and only the bravest at our table committed to sample it. We named it "The Menacing Squid." Just moments after being seated, 4 bowls of piping hot noodle soup were gently placed upon our table. Our hostess took a few seconds to smile at each of us, with her head cocked slightly to the side, genuinely appreciative for our existence on this earth. We each smiled back.
In Asia, the kindness of the locals has me consistently awed. Explaining this level of benevolence to those back home is rarely executed properly and I end up saying corny stuff like, "They treat you like a celebrity." The truth is, 99% of the people that you meet are genuinely excited to see you. It thrills them that you have taken an interest in their country and culture. This runs counter to the collective wisdom that Americans shape through international travel mishaps. The story is usually the same. Americans go to Europe, deal with a few rude Parisians, pay too much for a club sandwich in London, and write off foreign travel as an expensive endeavor dealing with rude foreign cultures. They opt to spend the rest of their foreign trips in some over-manicured all-inclusive Caribbean purgatory. Clearly, they have never dealt with the utmost hospitality of a Laotian woman serving bowls of noodle soup on a river bank. And at $1 a bowl, it is hard to call this home cooked meal expensive. 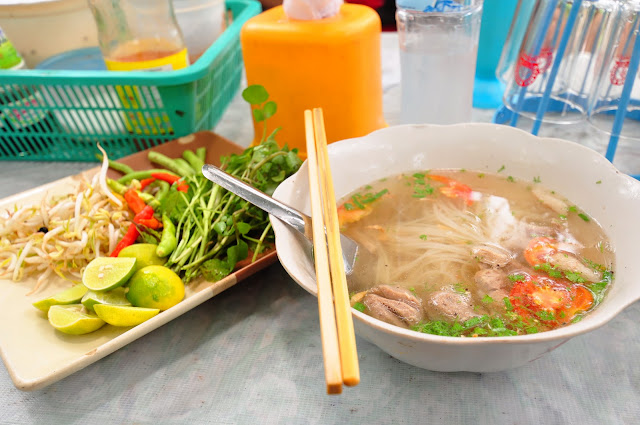 Each bowl was served with a side plate of fresh accompaniments, likely just picked earlier that morning in a garden just out of view. The plate contained bean sprouts, cut limes, some sort of edamame, fire red chilies, and a whole grip of fresh herbs. The bowl of soup itself sat there, just being glorious. I threw in handfuls of each side ingredient, saving the limes for last. The broth contained fresh herbs like cilantro and basil, with some thinly diced green onions thrown in for good measure. The steam raised off the face of the broth slowly and peacefully, decorating the air around us with the trappings of a sensory delight on this cold depraved morning. The fresh Thai basil and star anise began to open up my sinuses and I vowed to get serious with the dish.
I stirred in my side ingredients, added a bit of chili sauce, and placed my thumb and forefinger on my soup spoon, pondering the plan of attack My cohorts were in deep slurp mode, eyes watering from an overcompensation of "Meancing Squid" hot sauce. I grabbed my light wooden chopsticks and decided that mouthfuls of noodle would be first. The noodle soup had thicker noodles than pho, yielding slightly to the bite, but putting up enough fight to let you know they were hearty. I twirled the noodles around my sticks, taking the time to stab a beef ball or two that floated to the surface of the massive bowl. The beef balls exploded with a hot intensity in my mouth. They were meaty and salty and perfect. I had an uncharacteristically divine urge to stand up and shout, "Halleluiah" down the Mekong at the small narrow fishing boats that plied the river for catfish the size of Volkswagen Beetles. It was a near religious experience. 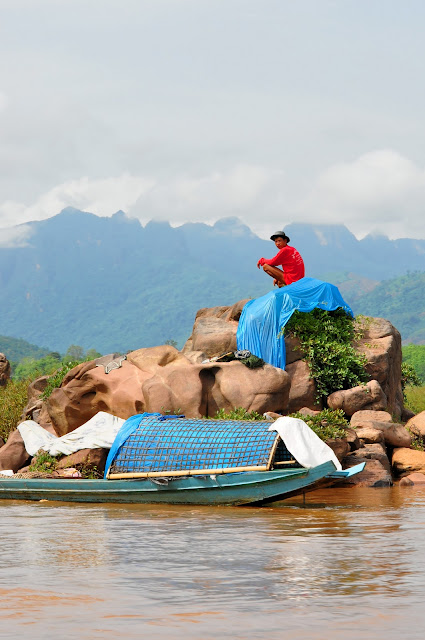 Now through, the time was nigh to test my mettle for heat. It was time to tangle with the "Menacing Squid." I stirred in a few drops at first, slowly graduating to an inescapable Scoville prison. At this point, my friends and I looked like a pride of red hat ladies fresh from a Steel Magnolias screening. Eyes red and watering, we laughed and slurped while the morning faded, the mist lifted, and we primed ourselves for the next adventure. 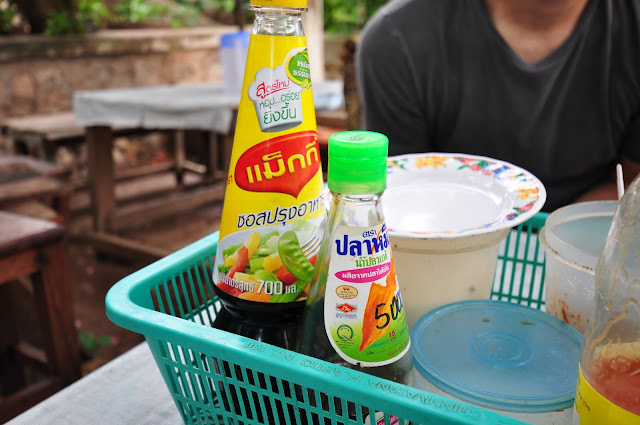 Posted by justindelaney at 12:37 PM