Carnevale
It was a damp Venetian evening, and I lobbed my luggage off the Vaporetto at Piazzale Roma. A massive crowd buzzed about the station, cackling and hooting. It was mid February, and I had not prepared for such crowds. During my flight in from arid Sharm el Shiekh, I had envisioned a wintry Venice where steps echoed across abandoned squares and snowflakes fell undisturbed to the ground. I was greeted with the opposite. A raucous party of some sort was in full swing. As I stood, trying to make sense of the madness at the station, a line of eight Lego men walked past, robotically one arm before the other, in slow deliberate motion. They disappeared into a menagerie of goblins, Baroque aristocrats, and tourists firing off rounds of photographs like young mujahedeen soldiers. I had unintentionally staggered upon Carnevale - a treat for the over prepared and uninformed.

Carnevale starts about two weeks before Ash Wednesday and ends on Shrove Tuesday, more commonly known stateside as Fat Tuesday. The costumes were introduced as a way for revelers to obscure identity and social class, allowing equal opportunity for debauching. The party spreads out across the heavily trafficked parts of Venice, with evening performances in Piazza San Marco and hordes posting up along the Rialto Bridge. While many European students make the trip to party, it is notably tamer than Mardi Gras, catering to a higher end demographic.

The Original Ghetto
If you have ever found yourself contemplating the etymology of the term "ghetto," but were to lazy to do the wiki legwork, then you will at last be united with the term's origin. The term is derived from the Venetian word for slag (gheto - a byproduct of smelting metal), and was attributed to the Jewish neighborhood in Venice that shared an island with a metal foundry. The old neighborhood still stands and is, in fact, the original ghetto. This ghetto was once the heart of the Venetian shipping empire and the inspiration behind Shakespeare's Merchant of Venice. To reach the ghetto, exit the San Marcuola station along the Grand Canal Vaporetto and head northwest.

Piazza San Marco
At the heart of Venice is one of the most ambitious and breathtaking plazas in the world. A vast open space flanked by historic sights, its gravitational pull has attracted travelers for hundreds of years. The Clock Tower, Basilica di San Marco, Campanile di San Marco, and Palazzo Ducale are some of the most popular sights in Venice and each is situated on the Plaza. While this is the undisputed tourist destination for cruise boat daytrippers, even the most jaded anti-mainstream traveler will marvel at San Marco's splendor.

Burano
Burano is an explosion of color. A residential archipelago about 30 minutes from Venice, Burano boasts buildings in every color as if created by a kid gone mad with a box of crayons. An order exists among the technicolor chaos though, as the government controls specificity regarding color choices for each home. If one of the 2,800 residents decides to paint, then he must first have his choices approved by the government. This process has fostered an aesthetic that is more Curacao than Caravaggio. While Venice has no shortage of photogenic subjects, Burano is the most vivid and unlikely. Even the locals' hanging laundry bursts with a myriad of colors. Be sure to bring a camera and drop by a bakery to sample some S shaped Burano cookies. To reach Burano, take the Vaporetto on the LN line from Fondamente Nuove, and depart when you hear the Italian man shout "Burano, Burano."

Torcello
Once a heavily populated island and Byzantine settlement, Torcello is now largely ruins and farms. A malaria epidemic and dead lagoon transformed a bustling trading hub with the East into a veritable no-man's land in the Twelfth century. Today, the population hovers around 20, and is most recently noted as being a favorite hunting ground for Ernest Hemingway. Torcello is a quiet place to stroll through history undisturbed passed sheep and edifices of the past. A main draw is the cathedral of Santa Maria Assunta, built in the Seventh century. It is one of the few remaining structures from Torcello's boom days. Torcello Island is located directly across from Burano and can be reached by Vaporetto or private boat taxi.

Murano
In the late Thirteenth century, after repeat fires in Venice were attributed to the foundries used by glassblowers, the craft of glassblowing was outlawed within the city walls. The blowers relocated to the island of Murano in the Venice lagoon. To keep the craft of glassblowing as secretive and local as possible, the blowers were not allowed to set up shops beyond the lagoon, and if caught doing so, would be brutally separated from their hands. This insured Murano's continued status as the center of the glass blowing world. A visit to Murano is not complete without dropping by a glass studio and watching artisans blow some fine pieces using red hot furnaces while they carelessly drink cold Peronis. To see a glass blowing demonstration look for a "Fornace Glass" sign exiting to the left at the Colonna Vaporetto stop. To reach Murano, take the LN line from Fondamente Nuove. 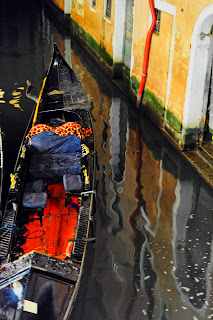 Gondola Ride
Few things are as romantic and storied as a trip down the Grand Canal in a Gondola. Gondoliers are almost entirely male and wear the signature black and white striped shirts. Reportedly, there is a lone female gondolier among the ranks of nine-hundred that ply the waterways as a trade. Negotiating with a Gondolier can be difficult, but the walk-away tactic could knock five to ten Euros off of the price. Eighty Euros for forty minutes is fairly standard, though expect to pay more between 7pm and 8am. The best time to ride is near dusk, follow it with dinner at an authentic Venetian restaurant like Al Covo.

Sunset over Lagoon, Gelato in hand
Sitting on the banks of the lagoon in San Marco, with a gelato-filled cone in hand, is a beautiful way to end the day. Watching the sun disappear beyond the beauty of Venice feels like being a smudge in some dusky Monet painting.


Charting the reign of the Doge
The Doge ruled Venice for over a thousand years. They built grand palaces and ruled undisturbed until the eighteenth century. Perhaps their most impressive contribution to the Venetian landscape is the Palazzo Ducale (Doge's Palace) adjacent to Piazza San Marco. The palace holds a variety of splendor that reflects the wealth of Venice's rulers, but some of the most interesting features are those that do not glisten and shine. A damp jail that once housed Cassanova, as well as various torture chambers, speak for the darker side of Venetian politics. Entry to the Palazzo Ducale costs 13 Euros, but opt for the 16 Euros admission which includes the secret passageways tour.

Lido
Off the beaten track, Lido is a seven-mile sandbar southeast of Venice - an authentic sliver of beaches and film festivals. The annual Venice Film Festival takes place in early September, and during the summer months, travel cognoscenti from all over Europe spread out across the chic beaches. Renting a bicycle will allow the speed to explore the long narrow island, and be sure to watch the sun set behind Venice to the west. Accommodation is cheap relative to Venice, so for travelers on a budget, Lido is a great option. The island can be reached via Vaporetto from Venice or by using the Alilaguna Waterbus from the airport.
Posted by justindelaney at 10:00 AM