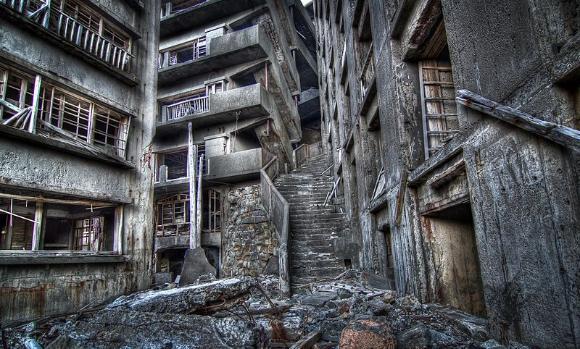 I wrote this piece right before Kristin and I married, almost 2 years ago.  Over a million people read it, and I just noticed that I never published it on goboogo.  So, here it is.  Here is the original run.

Some cities die. The people leave, the streets go quiet, and the isolation takes on the macabre shape of a forlorn ghost-town - crumbling with haunting neglect and urban decay. From Taiwan to the foothills of the Sierra Nevada mountains, these abandoned cities lurk in the shadows of civilization. Their histories are carried in hushed whispers and futures stillborn from the day of their collapse. Some have fallen victim to catastrophe while others simply outlive their function. I think we can all agree on one thing - they are all very creepy.

Pripyat
Location: Pripyat, Ukraine - 100km from Kiev
Story: On April 26, 1986, the Chernobyl reactor began its tragic meltdown. The incident was a huge blow to the viability of the nuclear energy platform, and still today, the town of Pripyat is an abandoned shell of a city frozen in a 1980's Soviet time-warp. While the failed reactor has been entombed in a an appropriate sounding casing called a "sarcophagus," the area remains unsafe for human life. The town has thrived in one aspect though. Wildlife has returned to the area in droves. Wolves silently hunt among the towering apartment buildings, and boars forage for food in the abandoned amusement park - which strangely opened the day after the reactor explosion in the midst of evacuation.
Abandoned since: 1986

Sanzhi
Location: Sanzhi district, New Taipei, Taiwan
Story: This area called Sanzhi was originally a vacation resort catering to U.S. servicemen north of Taipei. The architecture could be called UFO futuro chic, and the abandoned resort community had difficulties from the beginning. During construction, many workers perished in car accidents, and other freak accidents were common. The urban legend online search trail places the death count close to twenty. The deaths were attributed to supernatural causes. Some speculated that the resort was built on a Dutch burial ground while others attributed the misfortunes to a dragon statue destroyed during construction. Either way, the ruins never took their first guest, and the stillborn project was abandoned.
Abandoned since: 1980

Craco
Location: Craco, Basilicata, Italy
Story: Built on a summit, Craco's utility was initially derived from its ability to repel invaders. The town's placement on a cliff precipice also threatened its integrity. After being rocked by a number of earthquakes and subsequent landslides, Craco was abandoned for lower ground. Today, the empty village is great for exploration and houses a number of interesting old world churches such as Santa Maria della Stella.
Abandoned since: 1963

Kolmanskop
Location: Kolmanskop, Namibia
Story: Once a successful diamond mining community, Kolmanskop is now a desert ghost town where the houses welcome only sand. The desert city was originally built when Germans discovered great mineral wealth in the area. They built the town in an architecturally German style with a ballroom, a theater, and the first tram system in Africa. The desert reclaimed the town when the miners moved on. The sands have filled houses, covered the streets, and slowly erased most signs of civilization aside from the towering homes and public buildings. The sight of a decaying German town in the shifting sands of the Namib desert is anachronistically delightful.
Abandoned since: 1954

Ghost Island
Location: Hashima Island, Nagasaki, Japan
Story: During the industrial revolution in Japan, the Mitsubishi company built this remote island civilization around large coal deposits in the Nagasaki islands. The island is home to some of Japan's first high rise concrete buildings, and for almost a century, mining thrived on the island. At its peak, the 15 acre island housed over five thousand residents - coal workers and their families. Today, a post-apocalyptic vibe haunts the abandoned island and the dilapidated towers and empty streets exist in a creepy industrial silence. In 2009, the island opened to tourists, so now you can take a trip to explore the Ghost Island's abandoned movie theaters, apartment towers, and shops.
Abandoned since: 1974

Oradour-sur-Glane
Location: Oradour-sur-Glane, Limousin, France
Story: During World War II, the Nazi troops came upon Oradour-sur-Glane and completely destroyed the village, murdering 642 individuals. The burned cars and buildings remain frozen in time as they did in 1944, a reflection of the monstrosity of war and a memorial to the villagers who lost their lives. The massacre was one of mankind's most vicious moments. All visitors to the "martyr village" are asked to remain silent while wandering the melancholy streets of tragedy.
Abandoned since: 1944

Centralia
Location: Centralia, Pennsylvania, United States
Story: The entire city of Centralia was condemned by the state of Pennsylvania and its zip code was revoked. The road that once led to Centralia is blocked off. It is as if the city does not exist at all, but it does, and it has been on fire for almost fifty years. In 1962, a fire broke out in a landfill near the Odd Fellows cemetery. The fire quickly spread through a hole to the coal mine beneath the city, and the fires have been burning ever since. Smoke billows out from cracks in the road and large pits in the ground randomly open up releasing thousand degree heat and dangerous vapors into the air. The city has been slowly evacuated over the years, though some residents have chosen to stay, believing that the evacuation is a conspiracy plot by the state to obtain their mineral rights to the anthracite coal reserves below their homes. Smells like lawyers to me.
Abandoned since: still marginally occupied by 10 or so brave souls

Humberstone
Location: Northern Atacama desert, Chile
Story: Declared a UNESCO heritage site in 2005, Humberstone was once a bustling saltpeter refinery in the desert of northern Chile. Life on the moonscape of the Chilean pampas is extremely sparse, and outposts like Humberstone served as work and home for many Pampino miners. The hostile environment proved a menacing part of everyday life for Humberstone residents. Their efforts to extract nitrates from the largest saltpeter deposit in the world transformed farming in Europe and the Americas in the form of fertilizer sodium nitrate.
Abandoned since: 1960

Bodie
Location: Bodie, California, United States
Story: The poster boy for a ghost town, Bodie is absolutely stunning in its dereliction. The boom-town over 8,000 feet up in the Sierra Nevadas was a gold rush outpost, and, at its height in the 1880's, allegedly one of the largest cities in California. 65 saloons lined the dusty mile long main street, meaning the saloon to resident ratio was definitely high enough to keep the sheriff busy. Beyond the swilling of brews though, Bodie developed into a city filled with big town characteristics like churches, hospitals, four fire departments, and even a Chinatown district. Today, visitors are free to to walk the deserted streets of this town built on gold and hope.
Abandoned since: 1942, though the last issue of the local newspaper, The Bodie Miner, was printed in 1912.

Kayaköy
Location: Kayaköy, Muğla, Turkey
Story: Thousands of Greek speaking Christians lived in this town just south of Fethiye in southwestern Turkey for hundreds of years. The rather large village has been a virtual ghost town since the end of the Greco-Turkish War. Over 500 houses and several Greek Orthodox churches populate this garden of decaying structures. Some hope exists for a resurgence of this old city, as organic farmers and craftsmen have began to trickle in to this fringe community.
Abandoned since: 1923
Posted by justindelaney at 6:23 PM