The world's most crowded islands 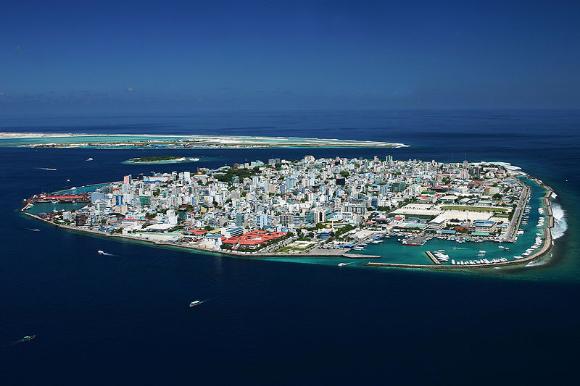 From an island microslum in Colombia to a haute enclave in central Paris, the ten most crowded islands in the world bear scant similarities in class or culture. In fact, every entry in the top ten comes from a different country. But being islands, each shares the common thread of scarcity - whether it be land, resources, or housing. In general, these islands are prophetical microcosms for an overcrowded earth - finite spaces where self sufficiency governs and demand pierces supply.

With the world's population racing higher and higher, and the "megacities club" accepting new members yearly, some day the earth could bear the traits of one of these densely packed islands.

Gallery: Most crowded islands on earth

10. Vasilyevsky Island
Location: St. Petersburg, Russian Federation
Population: 202,650
People per square kilometer: 18,592
Size: 10.9 square kilometers
Story: This island located in St. Pete is a collection of 18th and 19th century buildings with some Soviet built apartment blocks lining the Gulf of Finland on the western shore. The communist housing ethos of the twentieth century called for rows and rows of tight apartments, and this historic island in Russia's second city was not immune to the sprawl. This created the compact quarters of Vasilyevsky island. Famous for its old school stock exchange and giant Rostral columns, the island is popular with tourists.

9. Lilla Essingen
Location: Stockholm, Sweden
Population: 4,647
People per square kilometer: 20,204
Size: .23 square kilometers
Story: This small island in central Stockholm once served as a hub of industry for Stockholm's industrial operations. The easy boat access allowed for ease of shipping by boat, and the island factories manufactured an array of goods, from massive lamps for lighthouses to vacuum cleaners. Eventually, as the industrial applications became outmoded, the island became home to several apartment towers. Today, the island is crammed full of smiling Swedes living in apartments with (presumably) tasteful modern furniture.

8. Île Saint-Louis
Location: Paris, France
Population: 2,465
People per square kilometer: 22,409
Size: .11 square kilometers
Story: Perhaps the most stylish island in the world, Île Saint-Louis is a marvel of 17th century urban architecture and planning. Narrow roads and some of the priciest real estate in the world have allowed the island to remain relatively calm, despite its location in central Paris. While Île Saint-Louis is off of the tourist radar for most, this island in the Seine River embodies the classic Parisian spirit, worthy of an afternoon stroll with a perfect sorbet from Berthillon. The island is named for France's canonized King, Louis IX.

7. Manhattan
Location: New York, New York
Population: 1,585,873
People per square kilometer: 26,879
Size: 59.47 square kilometers
Story: In 1626, the Lenape Indians sold Manhattan island to the Dutch for a bag of axes, hoes, iron kettles, duffel cloths and other 17th century garb worth about $24 (roughly $1000 in modern value). It is safe to day the island has grown ambitiously from this humble transaction. The center of the financial universe is now home to many - truly a place where the world lives. The island once known as New Amsterdam, and briefly, New Orange, shadows America's story, both tragic and triumphant.

6. Salsette Island
Location: Mumbai, India
Population: 13,175,000
People per square kilometer: 30,217
Size: 436 square kilometers
Story: Salsette, an island off the western coast of India, is home to Mumbai and its sprawling suburbs. As a poster boy for "New India," Mumbai is as dichotomous as it gets, at once the wealthiest city in south Asia and also home to one of the world's largest slums - the notorious Dharavi. Dharavi is an island within an island, a super-slum with roughly one million people spread out over an area less than a square mile. At the other end of the spectrum, Salsette Island is also home to extreme wealth. The house known as Antilla is a 400,000 square foot giant that towers with some of Mumbai's tallest buildings. Truly a contrast from the squalor in Dharavi, the private residence houses six people, can accommodate 168 cars, has 9 elevators, and an ice room with snow flurries.

5. Ebeye Island
Location: Marshall Islands
Population: 15,000
People per square kilometer: 41,667
Size: .36 square kilometers
Story: When the United States decided to test nuclear weapons in the South Pacific, they chose to do so amongst the atolls of the Marshall Islands. U.S. officials uprooted many residents from Bikini Atoll and Enewetak Atoll to insure that the testing did not directly harm human life. The relocated Marshallese had to move somewhere, and most moved to Ebeye under the assistance of the United States. This forced relocation caused a huge mess, including a severe housing shortage and land owner legality issues that persist today. The combination of factors created an environment of hostility and squalor, creating the slum of the South Pacific.

4. Malé
Location: The Maldives
Population: 103,693
People per square kilometer: 53,121
Size: 1.952 square kilometers
Story: The Maldives is one of Asia's top tourist destinations, with 26 atolls and 1,192 islands offering beach perfection. At its center is the capital city - Male. Male is a humbly sized island of just a couple square miles. It is stuffed full of people, hotels, mosques, and office towers that efficiently utilize the scare land resources. While landfills have reclaimed some land from the sea, most progress is made vertically rather than horizontally. The modern downtown island in the middle of the Indian Ocean is a stark aberration from the deserted islands that dot most of the Maldives.

3. Ap Lei Chau
Location: Hong Kong
Population: 86,782
People per square kilometer: 66,755
Size: 1.32 square kilometers
Story: Hong Kong is the land of a thousand towers, clustered most densely on the island of Ap Lei Chau just southwest of Hong Kong Island. Ap Lei Chau served as the settlement for Hong Kong Village, theorized to be the etymological source for the famous larger territory of Hong Kong. Strangely, Ap Lei Chau translates to Duck Tongue Island, said to be named for the island's shape. It is filled with high rise residences and even a winery.

2. Migingo Island
Location: Kenya, though Uganda disputes this
Population: 400
People per square kilometer: 100,000
Size: .004 square kilometers
Story: This bantomslum in the middle of Lake Victoria is a fishing village perched precariously on half a sphere of rock. The residents take in large hauls of the Nile Perch - a poster boy for River Monsters that can grow to a comedically large size. Migingo is famous for a decades-old dispute between Kenya and Uganda over the sovereignty of the small island. There is even a facebook page where individuals can "like" declaring the island Kenyan. (The page has twice as many followers as there are residents on Migingo.) Uganda agrees with this claim, most of the time, though the tiny rock island is not the issue - the fishing rights are.

1. Santa Cruz del Islote
Location: Colombia
Population: 1,247
People per square kilometer: 124,700
Size: .01 square kilometers
Story: The most densely populated island in the world is a microslum off the coast of Colombia. This tropical island is located in the emerald waters of the idyllic Caribbean, though is packed so tight that most activities are done off island. Schooling, football, graveyards, and work all take place away from Santa Cruz del Islote. The island park is the size of a small tennis court, and fresh water must be shipped in by Colombian Navy ships. Santa Cruz del Islote also does not have electricity. What the island favela does have is people, lots of them. To visit the world's most packed island, hop on a ferry from Tolu, Colombia. The nearby hotel of Punta Faro can arrange tours of the island.

All unattributed images from wikimedia commons
Posted by justindelaney at 8:30 AM