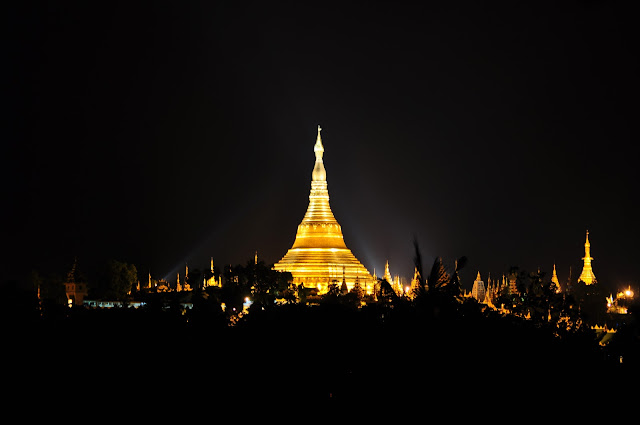 Our last flight on the hardly prestigious Yangon Airways would have us gripping our arm rests in white knuckled terror.  Imagine being at a haunted house with ghosts groping your nethers and a meth addled axe murderer lurking just shy of a shadow line beyond your bedroom window.  The axe glistens from your porch flood lights as he slowly steps towards the house.  That scenario can begin to explain the high levels of survival adrenaline coursing through my throbbing veins.  Anvil seconds slowly accumulated to form minutes that would eventually form an hour, and I counted them all.  Ironically, we had been taking off into thunderstorms on all our other derelict Myanmar flights, and for this flight, we initially welcomed the clear skies as a nice change of pace.  The storm was out there though.  And we headed straight into it.

Survival justifications began to form in my mind as our steel tube bobbed and weaved natures windy jabs.  Yangon Airways has two planes.  Surely, I thought, if anyone wants to keep the plane in the sky, it is those that stand to lose half of their fleet into the muddy Irrawaddy river.  And their slogan, "You're safe with us," they mean such a thing, right?  Or was it ominously crafted with irony and a wink.  Either way, it began to take on a more curious meaning as my stomach slingshotted from the depths of my bowels to to the back of my tongue.  Back again.  I read page 174 of my book maybe 16 times.  It is amazing what thoughts of death can do to an already sensitive attention span.

Of course, we all know how the story ends.  We land, almost skid off of the runway, and I forget about going down in a fiery blaze almost instantly.  In a vacuum with turbulence fueling the suck, we are left alone to our suspicions, egomaniacal inclinations, and fear.  It is easy to forget that the pilot deals with this nonsense daily, or that the odds of dying in a plane crash are similar to finding a krugerrand on the sidewalk.  I desperately craft deathly scenarios that defy possibility because my experience always seems unique or extraordinary.  Also in the early 21st, I could not lift off without having a bath in the Dewars first.  So maybe I am just a baby.

Yangon nee Rangoon is the quasi-capital of Myanmar.  It served as the capital city until the current regime of assault rifled baboons quietly moved it to the obscure city of Naypyidaw.  In the process, they renamed Rangoon to Yangon.  I wager that if you go around calling it Rangoon, some one will probably open fire on you, so we stuck to Yangon.  The soul of Burma remains in Yangon along with their national treasure, the perpetually jailed Aung San Suu Kyi.  Her party won the last election in 1988, but of course, never took power.  She has since won a Nobel, made a bunch of people sad,  and spent most of the ensuing years under some sort of arrest.  Metaphorically, this serves up a situation that is akin to the plight of the Burmese.

As a result of the capital's old colonial name, Rangoon.  We speculated endlessly about it being the authentic birthplace of the Crab Rangoon.  I think a lot about these crispy wontons.  Actually, if you ever see me in a public space staring wistfully out of the window with a mile long gaze, a small chance exists that I am daydreaming about crab and cream chesese stuffed delights.  The logic goes, Buffalo wings are from Buffalo, Crab Rangoon must be from Rangoon.  So the question goes, are these Rangoon inspired delicacies actually from Rangoon.  The answer, sadly, is no.  They are from America.  It did not stop us from ordering heaping plates of the fried morsels, and subsidizing our fried food guilt under the pretense of authenticity.  It is a small wonder that we have lost weight on this trip.

Our hotel, the Kandawgyi Palace, had upscale aspirations and a multiple personality disorder.  Sure the manicured gardens spoke to the ambition of a high dollar presence, but something sinister rose from the lawns.  Outside of our window, a gigantic Tyrannosaurus Rex sculpture loomed above the Japanese ponds, pool bar, and expertly sculpted shrubs.  Ye gods, I thought.  What the hell is this thing doing here?

Like curious children, we strutted down to the ground floor for a closer inspection of the beast.  Thankfully, probably due to incessant query from guests, a bronzed plaque stood at the base of the creature detailing whys and answering hows.  Apparently the building we were staying in had been a British Rowing Club, some sort of national party headquarter, and briefly, in the 60's, a natural history museum.  The Saur that stood in the courtyard once proudly announced to all the ingenuity and intentions of the Natural History Museum program. It lasted for only a few years.  And such is Myanmar, in its eccentric nature, questions do get posed and answered, sort of, but they leave the inquisitive groping at larger questions. Questions that seem like rhetorical riddles or perhaps erstwhile enigmas gone mad with too much time dawdling in the crevices of an uncertain existence.

I learned a valuable lesson.  If you walk by an all hours Yangon club and a transgendered being is singing pokerface in a husky voice, refrain from ordering the shrimp.  It will take root in your stomach, and ruin your night.

After being put on the traveler IR from questionable crustacean consumption, we basically just slayed around the hotel.  The storms came in and refused to leave, so exploration seemed futile.  In our hotel, we dined at an upscale restaurant called Nuts.  NUTS!  No experience is even close to normal here and dinner did not disappointment.  We were the only 2 people in the restaurant, and were waited on hand and foot by a team of 16 confused attendants.  The whole scene made me want to overturn a table and berate them all in Spanish, just to add my own surreal twist to an already psychologically mucked situation. Every time we ordered, they asked if we wanted 2.  It made me wonder what kind of nonsense usually went on around this place.  Kristin tried to order fondue, which was displayed prominently in an elevator advertisement for the restaurant, but it did not exist.  The whole meal felt like a plot-less movie or a bicycle without handlebars.  We just careened through time from one moment to the next, praying for it to add up in the end.  Luckily, the food did its job and we escaped.   It felt downright presidential in nature, having such a grand room to oneself, and figure that the tsars perhaps dined under similar circumstances.

We spent the evening watching Sex and the City while raindrops violently pelted the poor T-Rex just outside of our window.  It felt about right.  We were the world and the T-Rex was Burmese democracy.  Not now, HBO is on, we have no commercial break.  Our attention must be undivided.  Undivided, I say.  Abandoned in a courtyard, laughed at by sophisticated Chinese foreigners, and far beyond the function it served so long ago, Burmese democracy is no longer a real thing or even a foreseeable option.  All the notion serves is a dialogue for the intelligent; something for Bono to sell with his image at a U2 show.  It is a deserted monument and deader than dinosaurs.  It has been so far from normal for these people for so long, that normal is a different beast entirely.  Goodbye Burma, I hope you find what you are looking for and are looking for what it is that you need to find.  You need both really, and for the world to tune out to tune in. 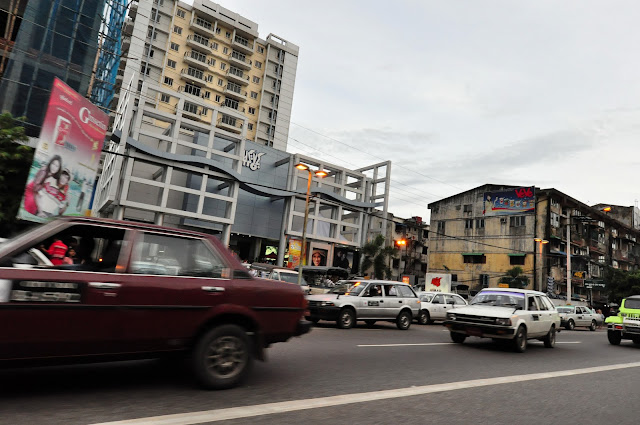 A typical Yangon street.  All of the cars are old Japanese cars from the 1980's 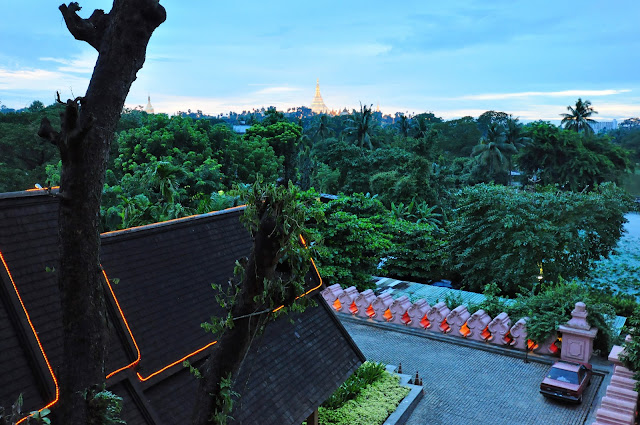 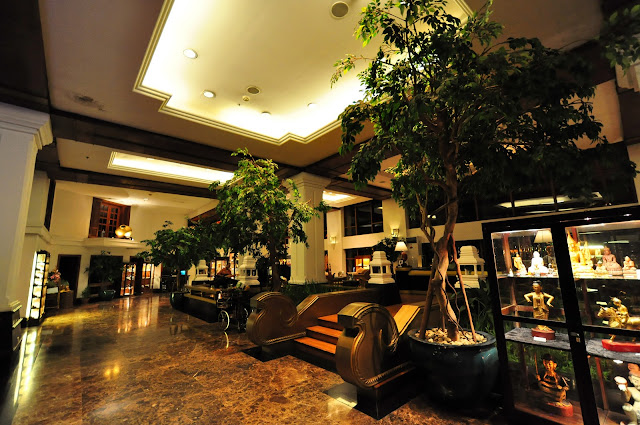 Our hotel lobby, which was cold and empty 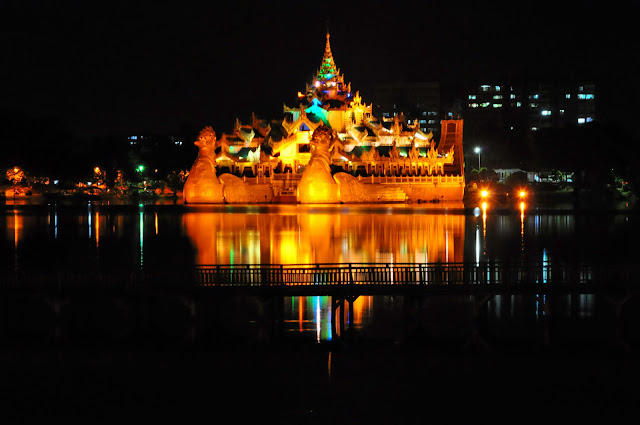 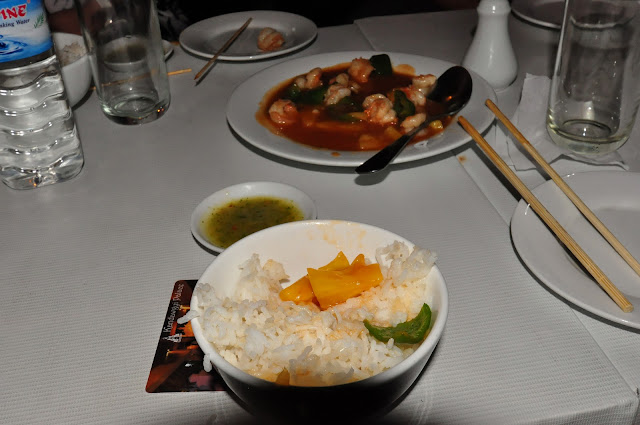 The shrimp that poisoned me 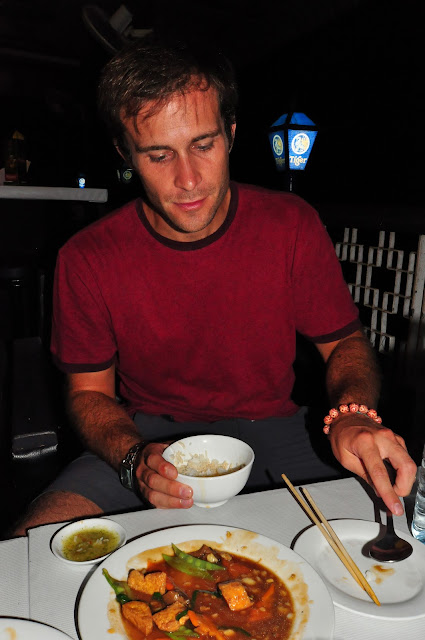 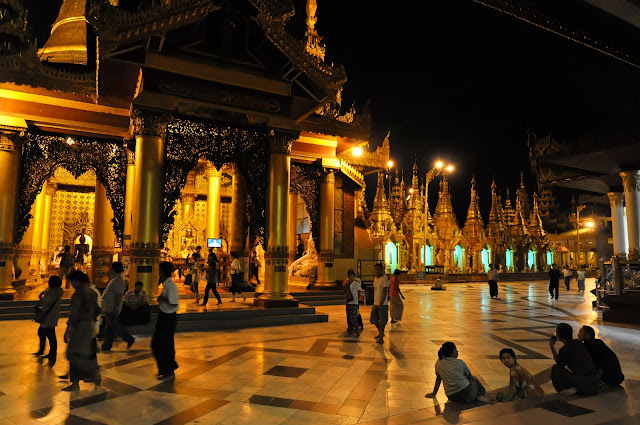 A crowd at Shwedagon at night.  Shwedagon is the most important monument in Myanmar.  It is built on a few of Buddha's hairs. 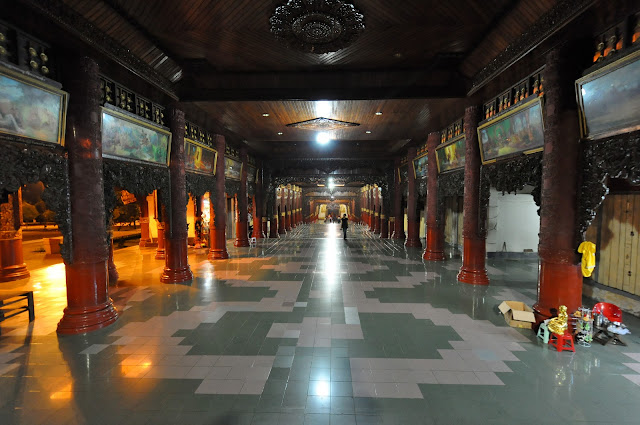 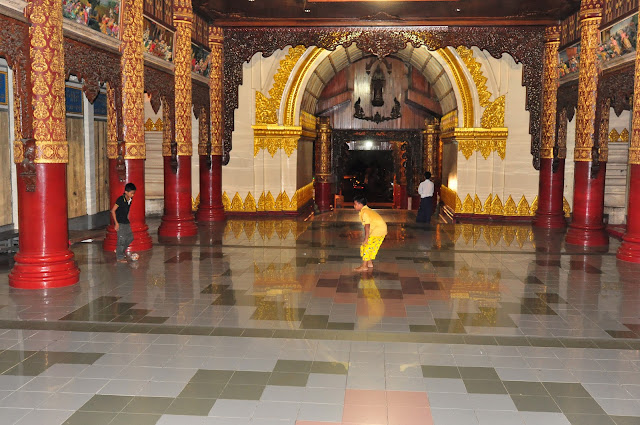 This was the night of the world cup final 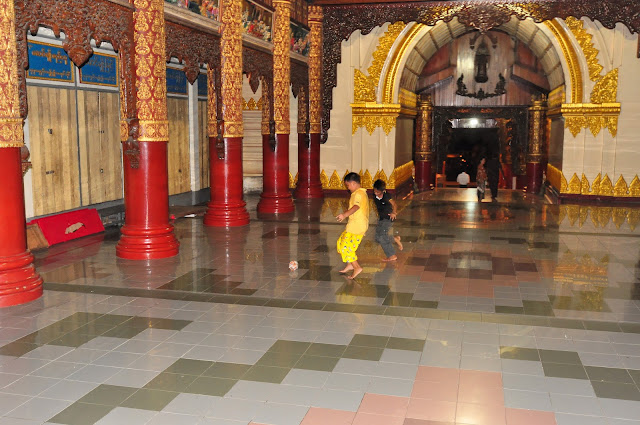 We watched this compelling match between 2 youngsters 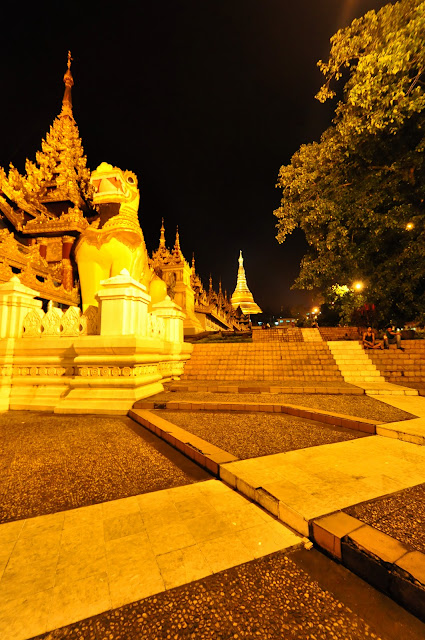 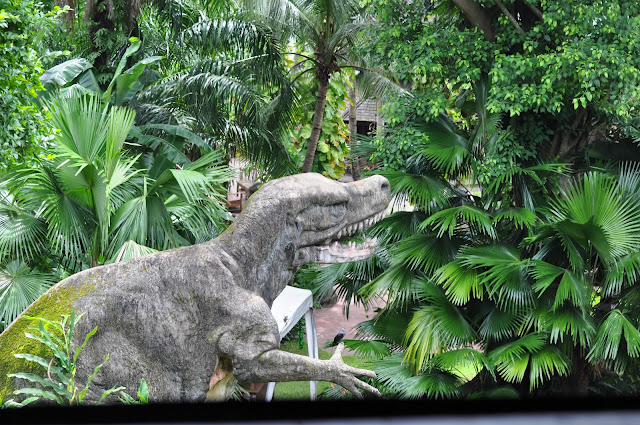 View from our window of the mighty Saur

Shwedagon just dominates the skyline.  On the top of the spire, the crown is topped with 5448 diamonds and the top diamond is 76 carats.  There are also 2317 rubies in the mix.
Posted by justindelaney at 12:10 PM