Bainese Internet is holding us back (Ubud, Bali) 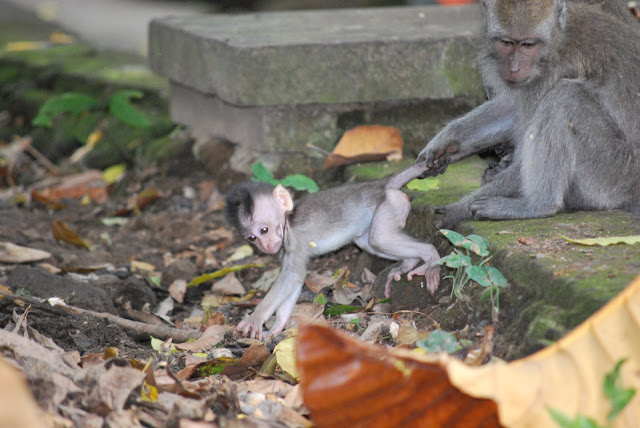 Our pictures from today are taking roughly 4 minutes each to upload to the site, so I am going to leave it on overnight and throw them up at 6 or so in the morning here, or in the late afternoon for the United States.

Right now, Kristin and I are sitting in our private garden terrace, listening to chanting and a Balinese storyteller engage some kind of fervent crowd in the distance across the rice fields.  We had a very productive day.  It all began with a lone bird singing his songs to us from above the bed at about 5am.  His bird tales of soaring through clouds and eating grains sounded like an old lopsided creaky tire, and though we banged on the wall to beg for his mercy, he want on with his chirps.  When we finally fell back asleep after assimilating the bird noise into our cycle, moments later, we were stirred from sleep with a loud, "Uhh-ahh, Uhhh-ahhh...Uhh-ahh, Uhhh-ahhh."  It sounded as though a man was standing at the foot of the bed, groaning.  Since our room at Green Field sat directly on the rice field and we had holes in our windows and ceiling, we could hear the rice farmer right outside scaring off the morning birds, very loud and very clear.  Exciting ways to wake up.

We were served breakfast on our patio, and Kristin and I had banana pancakes.  Pancakes here are much thinner and chewier than their american counterparts, but just as tasty.  We did some light exploring around Ubud (ooo-bood) before our driver, Ketut, was to pick us up.  Ubud is a town in the center of Bali, and it is filled with small villages, each filled with artisans that specialize in a certain thing.  There are stone worker villages, wood craftsman villages, painting villages, and so on.     Everything is organized.

Ketut arrived to pick us up around 11:00.  We took a leisurely stroll through the Monkey Forest, which is a dense forest filled with fun loving primates.  After picking out our sarongs that we would need for admittance to Bali's holy sites, we were off to the volcano of Mount Batur.  Batur is an active volcano and a huge mountain that sits next to a picturesque lake.  We also visited numerous temples throughout the day, but most of that is better explained through pictures that will be uploaded later.  We had a great day, just driving around with Ketut, learning about Hindus, and marveling at the intelligence of the animals here.  I saw a chicken look both ways before crossing the street.  Some monkeys here will steal your stuff and hold it until you pay them money.  We have no idea what they do with the cash, probably buy ipods.  Dogs can see ghosts and run alongside busy streets like pros.  It is pretty amazing stuff.
Posted by justindelaney at 9:17 AM