A Return to Hong Kong 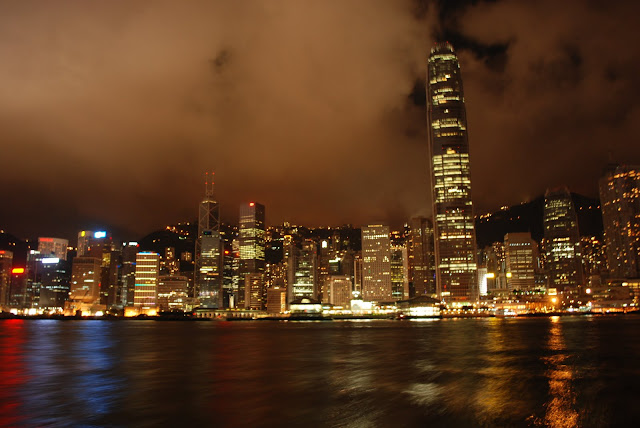 Hong Kong is an amazing city. At this point, I have to say that it is my favorite large city in the world. Kristin really likes how cute, bright, and friendly the city is, but has yet to crown it her favorite city in the world. That honor goes to Celina because Lou lives there, Go Bobcats! The subway system here is so flawless that I cannot even muster a complaint or single example of even a slight deviation from utter perfection. It is always on time, one never has to wait, the cars have plenty of seats, it goes all over the city and beyond, and it hauls some serious buns. Aesthetically, the city is a beautiful blend of water, mountains, green, and modernity. Most large cities have green scapes that just seem contrived and built into the city (New York, Boston), but Hong Kong feels like it has been designed with a certain dedication to balance of nature and man. I used to play a video game called Sim City, and Hong Kong is what your city would look like if you cheated at that game and built the perfect city. The people are extremely nice as well. A man that worked for the subway even randomly offered me a towel to wipe my sweaty forehead with at one point during our travels throughout the city. It made me think of the types of people that have these types of jobs in the United States, and how unlikely the above scenario would be. No way that ever happens. People are generally very helpful and seem to go out of their way to communicate pleasantries with a smile. Hong Kong has more shops and diversity of goods than anywhere I have ever been. It is a very good place to be a consumer. For example, tonight we visited a 14 story mall and spent some time in a shop that was trying to sell us a Chanel women's watch (40usd) and an Audemars Piguet men's watch (60usd) that both looked unbelievably real. 2 blocks over, you could buy both of the watches in their real versions for 200 times as much. It has a great range of options. The city also is very rich with a culture that is impossible to completely escape, but this is a very good thing. I could go on and on about Hong Kong, but after spending the whole day enjoying it, it is far too late for more elaborations on this subject.

We began our day in Macau at 6am. We decided to forgo our morning gambling and begin the journey back to Hong Kong. We took 1 taxi through the pouring rain back to the ferry station, and boarded a return boat with all the other gamblers and freaks that are up this early. It was a much smoother ride than our initial one. The boat was about twice as large. Oddly, we were again seated in the 10th row with a snoring Chinese guy blocking the aisle. Fun. After taking the Ferry to Central Hong Kong Island, we boarded the orange line for a 30 minute train ride to Lantau island, one of the outer Hong Kong islands. Our hotel is located in a gigantic mall on Lantau Island and is called the Novotel Citygate. We really like the hotel. For the first time during this trip, our bed is actually soft. We were beginning to think that all of our beds over here would be hard because maybe Asians like firm beds. Thankfully, we have found an exception to our hard bed hypothesis. After checking in and a light lunch to a cacophony of malfunctioning fire alarms, Kristin and I decided to part ways. She had not been feeling well all day and desired some quiet time at our hotel to sleep, read magazines, work out, and enjoy the spa. I wanted to continue my love affair with this wonderful city. I began my long journey to the Sha Tin 10000 Buddhas Monastery. I would utilize 4 subway lines, walk about two miles, and climb over 500 steep steps to reach this destination. The pilgrimage was long and brutal. After taking the subway to the "new territories, which is a large rural and suburb like area north of Kowloon and south of mainland China, I had to walk a ways to the temple entry. The actual temple is nestled up in the hills, about 500 steps up. It was an arduous task to climb these steps, and my mind wandered to that scene in Kill Bill when Uma is training with the master, and he makes her relentlessly climb steps. This gave me some peace, but my tendons stretched and snapped like a thousand rubber bands with each step. I am 30 years young I told myself, nothing is getting pulled today. The entire path up the hill is lined with gold Buddhas that appear to cheer and mock the climber. I made it to the summit, and enjoyed the temple with over 12,800 miniature Buddhas adorning the walls. The temple grounds were sort of under construction, but it was worth the trek.

After the long trip home, I arrive to find the better half taking Chinese tea in the executive lounge overlooking the Lantau mountains and cable cars. She was feeling better and wanted to go shopping. We had some light snacks with tea, and then got ready to hit up some night markets and dinner at The Peninsula Hotel, which for many years was considered to be "the finest hotel east of the Suez Canal." We began our shopping at Langham place mall, which offers 14 floors of shops, each floor arranged by theme (shoes, electronics, etc). We have been noticing a lot of young Chinese lesbian couples, and it always seems like one has a garish trucker hat on with a slogan such as: "Go Bitches!" or "What gets you up in the morning?" or "Sport Dude Flex." It is probably some type of odd Chinese microtrend, like emo rappers or ironic masons, which is something I may start when I get back home. Anyways, the mall was full of these couples. Kristin really wanted to go to the Ladies market, which offers knockoff items for extremely cheap, like fake Gucci handbags and A. Lange Sohne watches that usually retail for $50,000 for about 1/1000th of that. It is a heavy barter environment, and we decided that we would stock up when we come back through Hong Kong. because our bags our so full as is.

Our next stop was The Peninsula Hotel, which is sort of the place to see and be seen in Hong Kong. It is considered an institution for Hong Kong luxury, and we really enjoyed the main dining room. It is on the Kowloon Peninsula and the main dining room has huge floor to ceiling windows overlooking the Hong Kong Island Skyline. The room is everything stunning is meant to convey. Kristin ate a soup and salad (fist pump) and I had the sea bass on a bed of spinach and shrimps. The meal tasted amazing, but like all expensive meals my gag reflux of spending resentment creeped in following the final bite. We decided to take a cruise across the harbor on the Star Ferry, which is an old ferry that has operated for over 100 years. It was a very cheap (about 25 cents) and romantic cruise with a great view of the night skyline. I will post the rest of the pics in about 6 hours when I wake up. 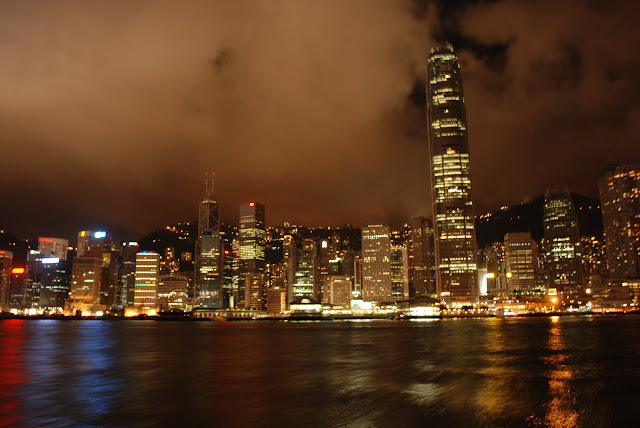 Posted by justindelaney at 1:04 PM