Reef diving off shore and a nervous massage (Pemuteran, Bali) 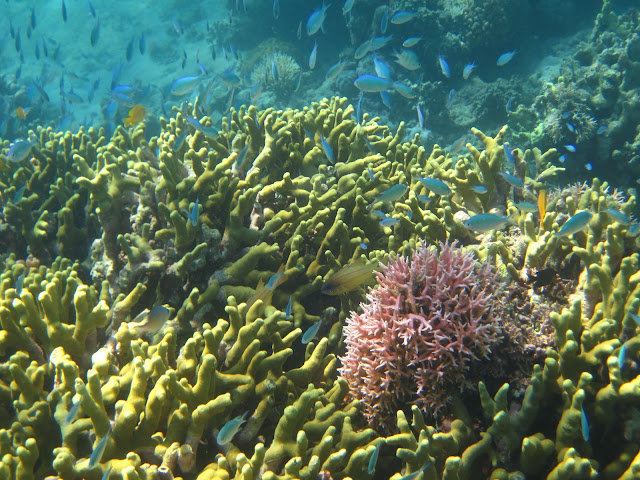 We had a pretty slow day today. We met a nice turtle, went diving, and had a massage. The massage happened to be the first of my life, and it was strange having some random Balinese lady rubbing my buns. I left feeling a little beaten, perhaps a little scarred even, but I guess it was a hell of a $15 massage. Kristin enjoyed her third massage of the journey and was quick to book a facial for both while she had me at the spa. Can't wait to have my lobes rubbed on tomorrow by indonesian man-servants.

The dive shop we booked our dive through runs a breeding and rescue program for leather back sea turtles. This is how we met Boomer. Boomer was born in the mid nineties, raised by the dive shop, and later released into the wild. The day he was released, he returned later in the evening for a snack. Since this day, he comes and goes as he pleases, stopping by for free room and board whenever he can. Our encounter with Boomer was a pleasanet one. He likes to have his fins and head rubbed, and lucky for Boomer, Kristin likes to rub the fins and head of sea turltes. He amused us by making strange turtle noises and blowing water out of his little snout.

Our dive was sort of a failure. Kristin could not equalize her ears due to sinus troubles, so she had to surface when we got down to about 40 feet. I enjoyed the sights at the bottom of the North Bali Sea, and we found out later upon surfacing that a shark was even in our midst, watching us throughout the dive. Unfortunately, our dive group missed his cameo appearance, though the other group got some great pictures of the beast. I did see a gigantic sea slug the size of a fat man's arm, and it hung just so. We saw lots of strange sights, and it is too bad that Kristin was too congested to share the experience. It is a serioius matter diving with sinus problems, so I canceled our dive tomorrow for Menjangen Island. We are going to snorkel instead, which will still be great.

We had a great dinner a few hours after our dive. We both ordered asian chicken dishes, and mine was steamed in a banana leaf stuffed with Balinese herbs and spices. It was really delicious. Kristin had a grilled chicken breast with steamed rice and vegetables. After our meal, it was time for my fate at the spa. We had a tradional Balinese massage, and I was very apprehensive about the procession of events leading up to and including the point when the masseuese demanded I remove my clothes. No turning back now I thought, and moved to embrace the massage whole-heartedly. Once you are making a messy pile of your own clothes on a teak floor, the time has come to remove any cognitive dissonance. I have never had someone invade my personal space more vigilantly and completey. It was a weird experience to have a first massage, enjoyable, frightening, and a little on the strange side. I would totally do it again.

Well, we are calling it a day. I just took a shower in our open air real planetarium shower, still can't believe the visibility of stars here. What follows is a collection of photos from our day, lots of pictures from the offshore reef. 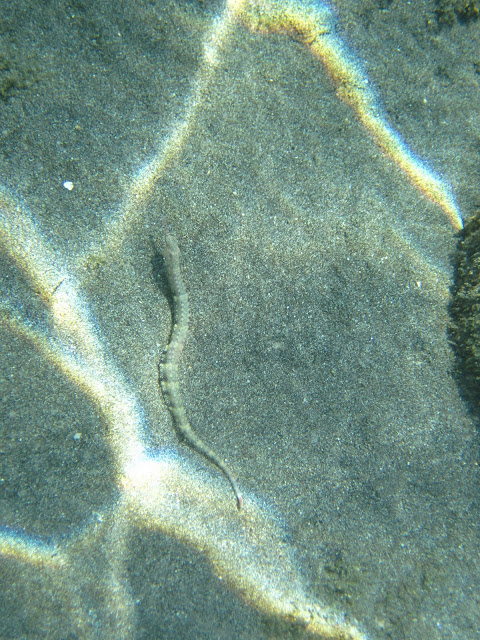 A snaky fellow in the shallows 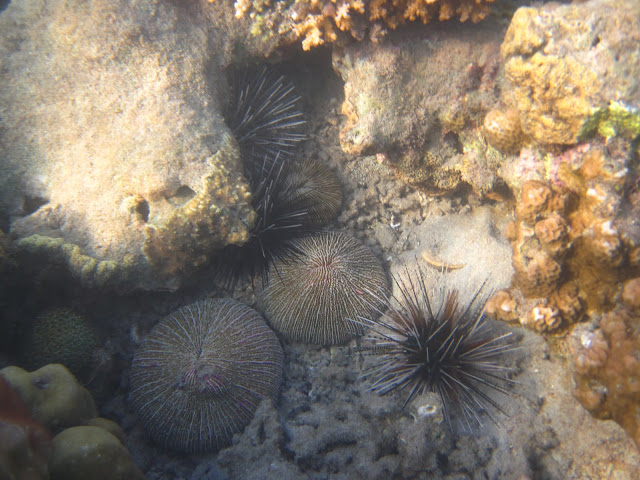 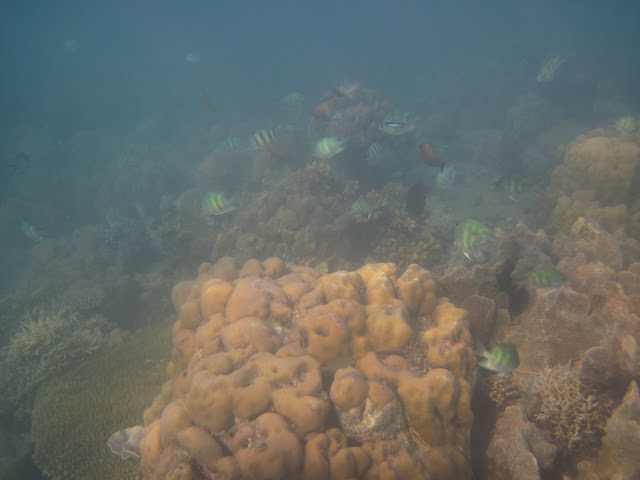 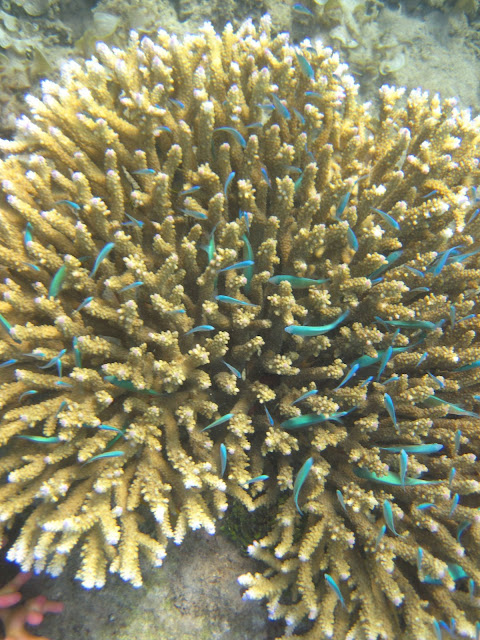 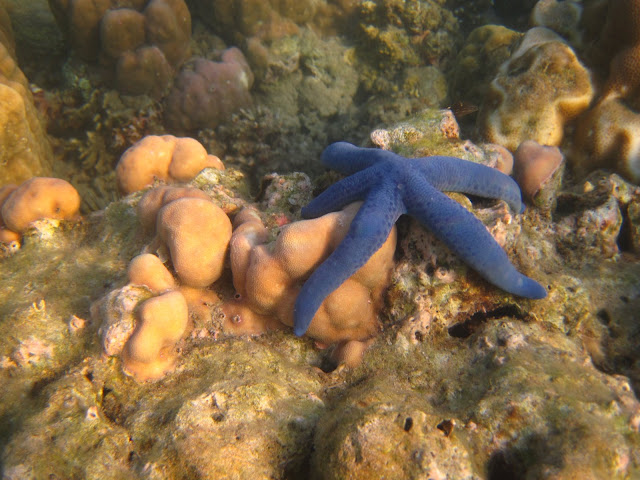 Kristin just saw one of the arms, and I saw her take off towards the

shore, not stopping until she was on dry land. She thought it was a 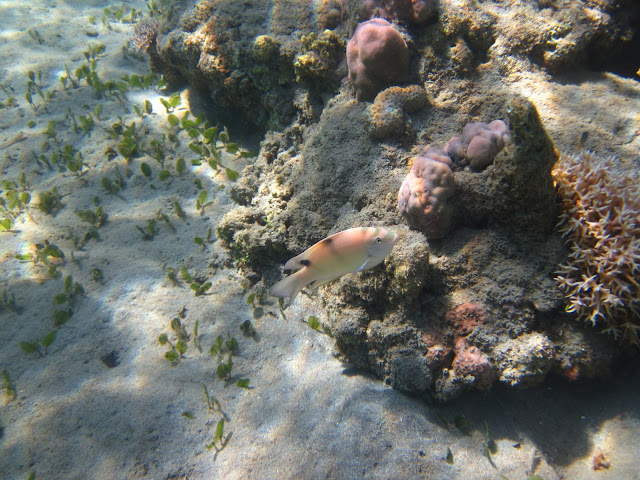 This fish was pretty curious, kept following us around 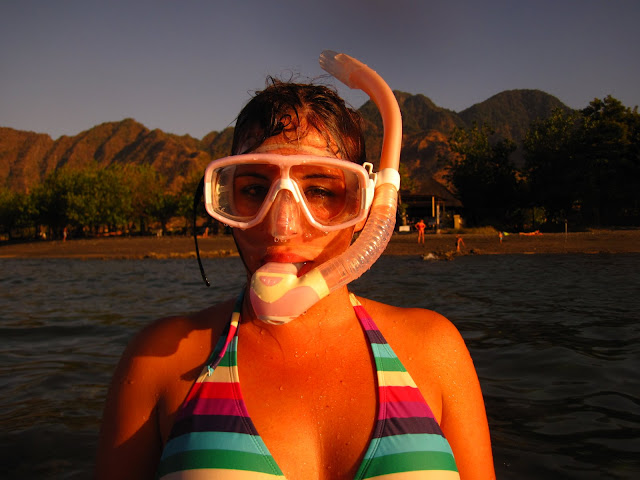 Not a bad sight to surface to 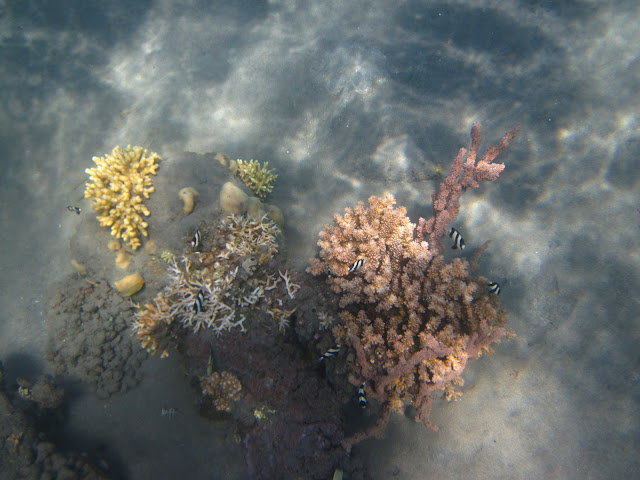 The outskirts of the reef 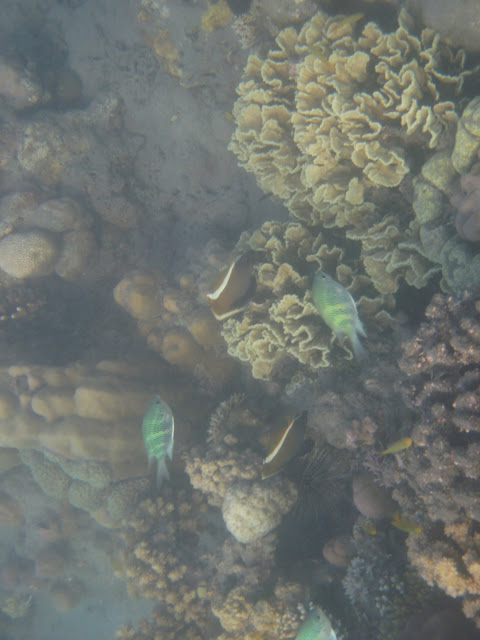 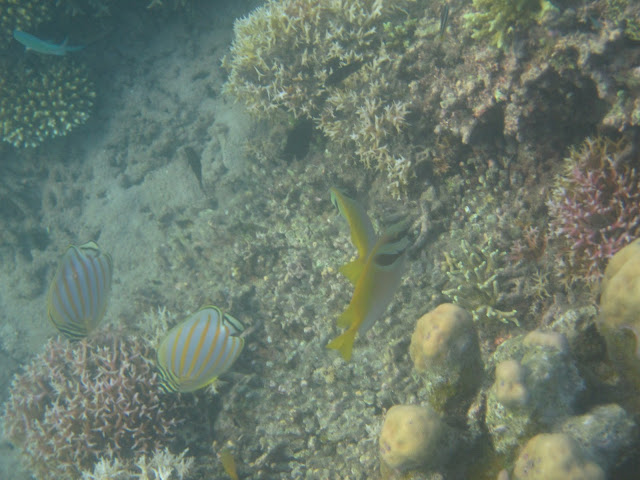 Pretty fish that failed to accommodate me with a good angle 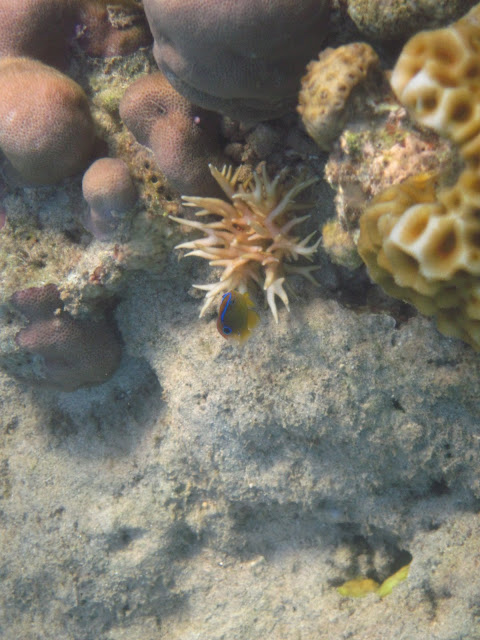 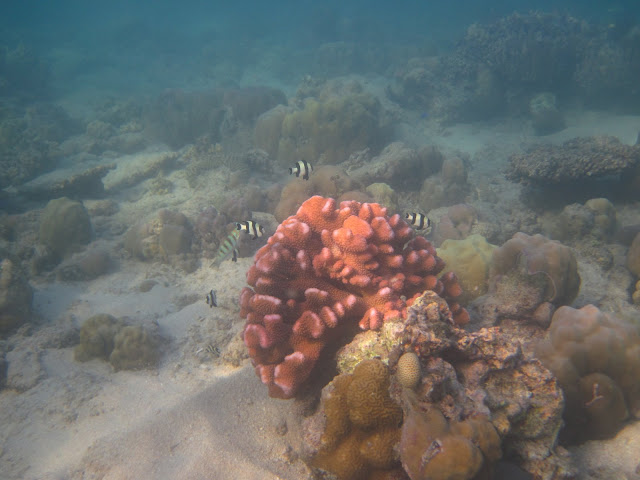 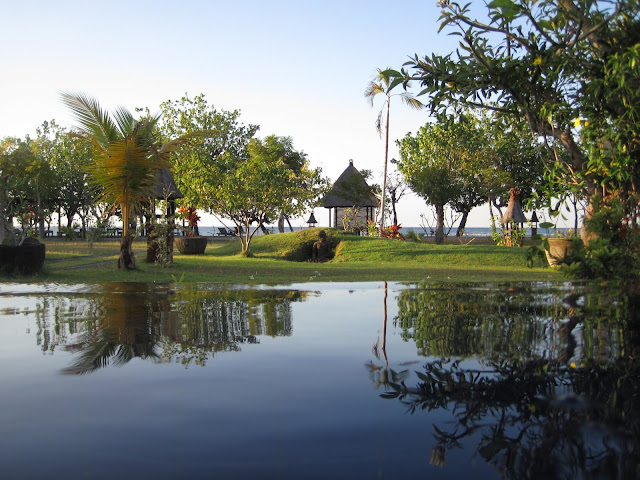 From our comf pool 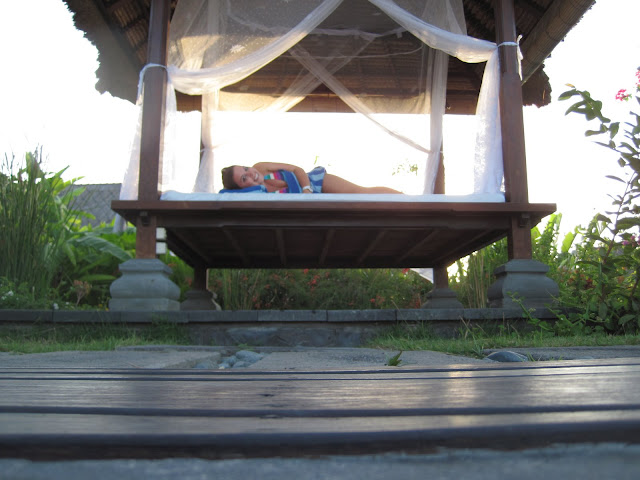 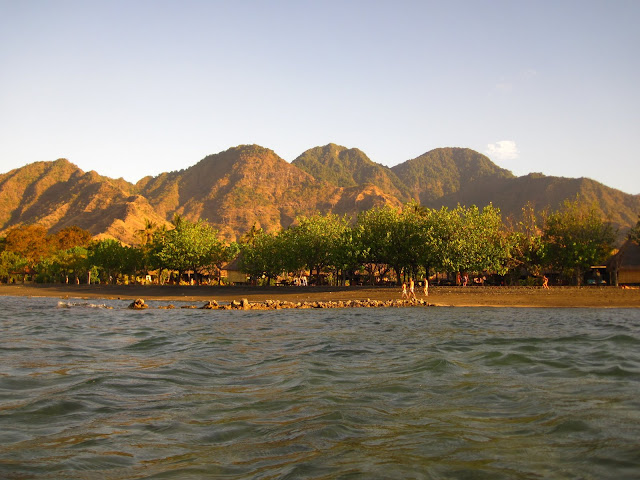 On our way to dive 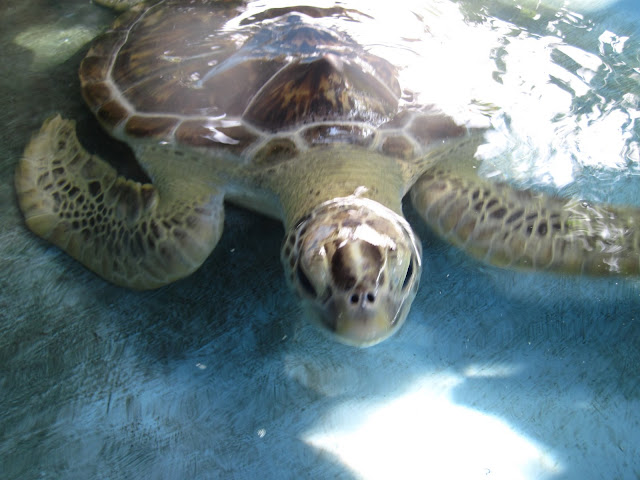 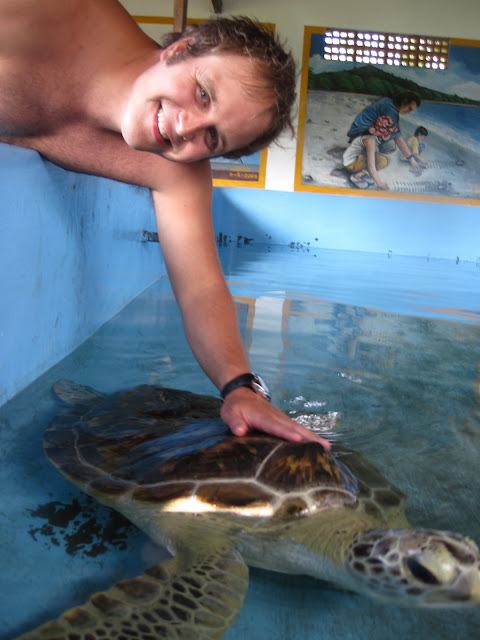 Boomer was such a friendly turtle 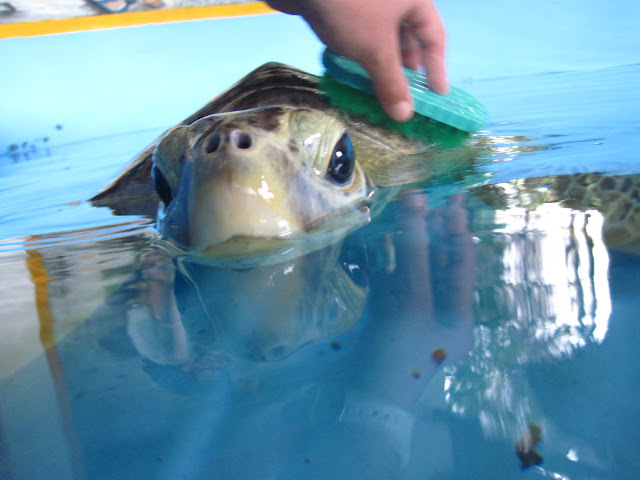 Likes to have his head scrubbed 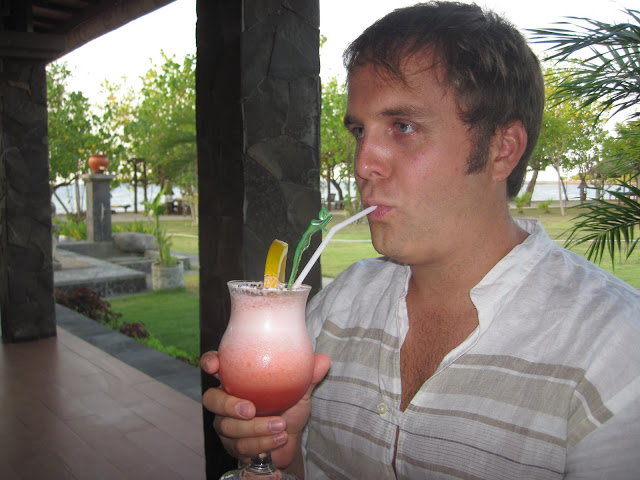 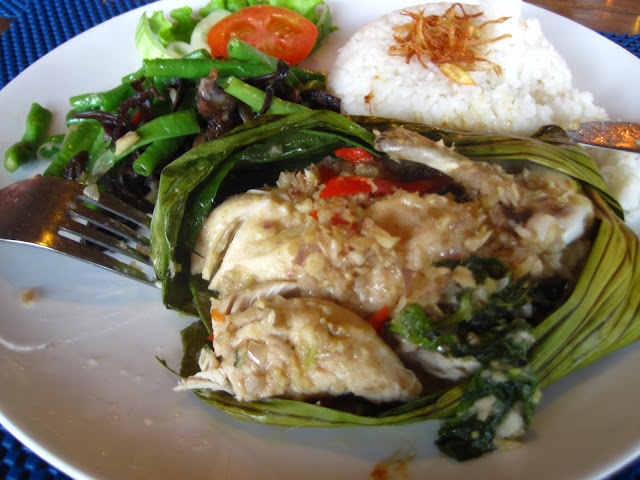 My dinner, chicken steamed in a banana leaf 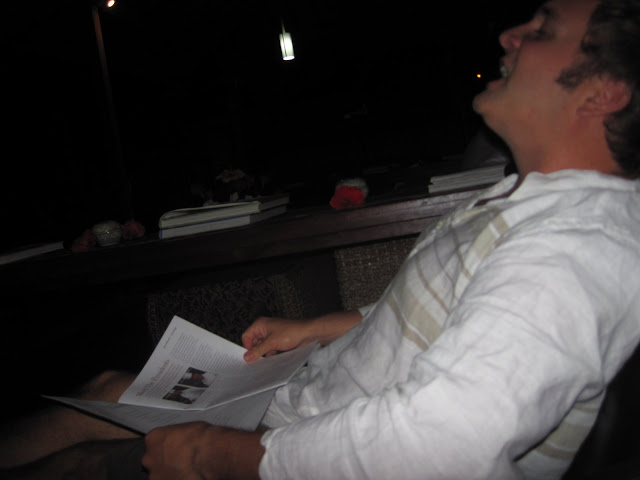 Hyperventilating with nervousness before the massage

Posted by justindelaney at 1:08 AM